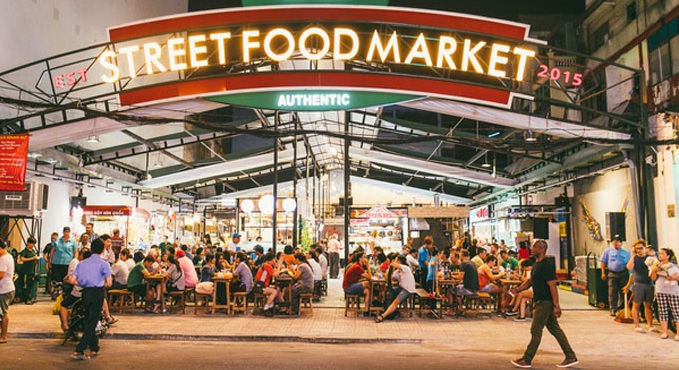 …………………………..Following from the article about the Street Food From the South

We did talk about the tradition of the warm weather and the Street Food from the south but that does not mean that the north has to blush in comparison. The variety and the quality also on the North will leave you astonished. And for the one who’s thinking that Street Food in Italy is only about Pizza please carry on reading and you will rethink it all.

Friuli is a strange region in terms of gastronomy and we might give more space in a dedicated article in the future. However today we are here to talk about street food. Even there, it might not excel among other region but has got is own delicacy.
This is also a region with a strong tradition with cured ham and cheese and so sandwich is the most common dish within the street food. The delicacy that we are talking about are most certainly “Porzina Calda”. This is pork meat, boiled and served either on a sandwich but also on a dish with sauerkraut and mustard however has to be served hot. In the same establishments that serve “Porzina” you will also find the characteristically prepared and cocked ham rigorously cut by hand.
The Austrian influx also brought was is known in the world as “bockwurst” here is called “Luganighe de Vienna” or Wien’s sausages.
Coming instead from the east, one of my favourite, that you can find in Trieste is coming from Croatia, Slovenia or the Slavic countries. Those are called “Cavapcici” and they are made of mixed meat of cow pork and lamb. Made by hand as a burger could be but shaped as 10/15 cm long cylinder. Cocked on the grilled and served with raw onion and delicious sauce called “Ajvar”

Liguria and its Focaccia comes next. Probability because of it fame reached outside of Italy where, after pizza, is one of the most known Italian street food. Most of your might argue that this is is basically a pizza, however this is not. The dough is of a different recipe, the final result come much higher and softer of a Pizza. Also you do not dressed the Focaccia before cooking it but after and on top you can put all sort of cured meat cheese that Italy is always rich of.

Tuscany instead, has a very basic kitchen and this is also reflected into the street food speciality. That is called “Lampredotto”, is a sandwich filled with cow meat, a specific cut taken from the fourth stomach of the animal. Slow cocked in a broth seasoned with herbs and often toped with spicy sauces.

Although we do not talk about Rome too much in our blog it is still worth to mention the street food culture in the city. As this is the most visited city in Italy you can find example of everything. However, the city itself has a strong street food tradition. Pizza is on top of the list and many variety and forms are always present in the stands. Nowadays there is also a modern version which is a pizza sliced folded to make a cone shape.
What is traditional from Rome is the “Panino con la Porchetta” or Sandwich with roasted pork. A delicacy which the recipe come from immemorable times and it is still delicious and popular today.
Another speciality is “Suppli”. They are very similar to the Sicilian Arancine, however there are some differences. The first one is the shape as the Suppli comes in a smaller size. The other main different is that the rise, used to make them, it is cooked without sauce in the Sicilian version which in Rome the rise is cooked with tomato sauce. Then, again, they get their fillings, closed as balls and deep fried.

We decided to put Emilia Romagna not for the numbers of variety offered but rather fort the quality. Emilia Romagna in fact is worldly famous for its cured meat, Parma Ham, Mortadella, normal Ham and many different kind of Salami. It is also very popular with cheese. So, you would understand that a Sandwich in this region is by itself a delicacy worth mentioning. However, the people from here decided to evolve it and make more attractive
This is called “Piadina”. This is a flat bread very similar to pitta bread but rather flat and bigger, kind of a pizza if you may. It is also served warm from the grilled and filled with all this kind of cured meat.

Marche also reached world fame with a speciality from Ascoli, “Olive all’Ascolana” (Ascoli’s Olives). The regional olives have origins from the “Kalamata” Greek kind that are bigger in size. This is a characteristic that make possible to coat the olives with a mix of meet and than covered in breadcrumbs and deep fry afterwards. A dainty.

This region instead has to offer us their own version of a modern Kebab. Its called “Arrosticini”, is a meat skewer made with mutton meat or lamb, cooked on a brazier. Generally served in bread garnished with olive oil (“Pane unto”) and to be extremely traditional you will have to drink the typical wine, Montepulciano D’Abruzzo.